The Kolkata Derby commonly known as a “Boro Match” is one of the most fiercely contested and best attended derbies in world football. The football loving mass of  “City of Joy” get polarized on a derby day and pledge their allegiance to either Green & Maroon or Red & Gold. Kolkata derby is historically and culturally significant and attracts close to 100,000 people on a regular basis.

The first ever Derby match was played back in 1921 in Cooch Behar cup semi final. The match ended in 0-0 stalemate. The replay match was played on 10th August,1921 and dominant Mohun Bagan thrashed arch rivals East Bengal by 3-0 margin courtesy to goals from Rabi Ganguli, Paltu Das Gupta and Abhilash Ghosh

Given below are overall statistics of derbies played till date.

There were defensive mistakes & goalkeeping errors on both sides. Manish Maithani & Chidi (two goals), scored in first half as the half time scoreboard read 3-3, unheard of in a derby. In second half substitute Sangram Mukherjee gave assurance in Mohun Bagan goal while Chidi struck two times to ensure a revenge of the loss in 1975 IFA Shield finaI.

Mohun Bagan 1-0 East Bengal (1978 Calcutta League): Shyam Thapa’s back volley in this match is arguably the most famous goal ever scored in a Kolkata derby & one of the most famous goals in Indian football history. Renowned journalist & writer Moti Nandi this goal to crest to a tidal wave. The goal came on 41st minute of the match after a cross from Subhash Bhowmik.

In defence Subrata Bhattacharya was steadfast, snuffing out Shabbir Ali while Goutam Sarkar made a valiant last ditch tackle to deny a scoring chance for Surajit Sengupta. East Bengal had a few chances but couldn’t get past Shibaji Banerjee in goal. 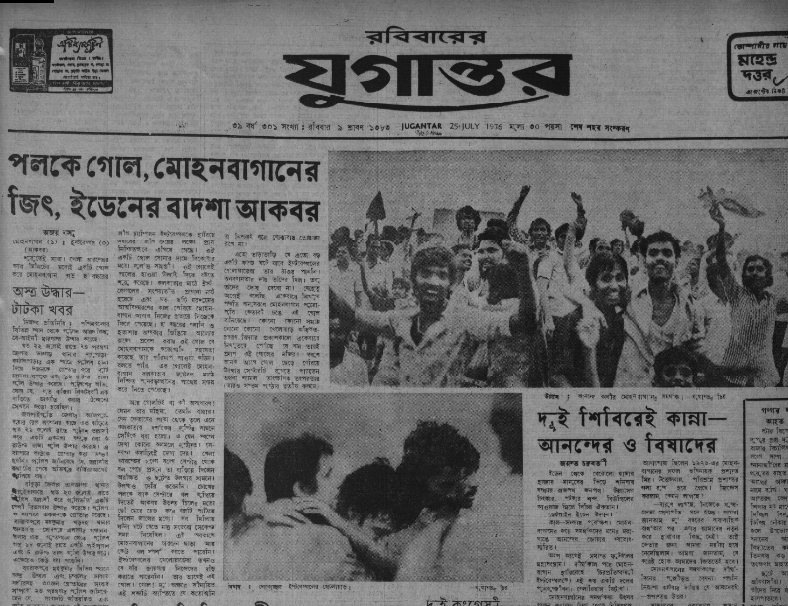 In final the stylish Pranab Ganguly tore a young Sudhir Karmakar apart by getting two goals. Sukalyan Ghosh Dastidar scored the third goal with a typically booming shot. Such was Mohun Bagan’s dominance that 3-1 could have been 5-1 or 6-1.

The match started with a bang as Narayanswami Ulaganathan sprinted past Sudhir Karmakar to cross towards Mohammed Akbar who headed Mohun Bagan ahead after just 16 seconds, still a derby record. Rest of the match became a slugfest between East Bengal’s forwards & Mohun Bagan defence. Pradip Chowdhury & Subrata Bhattacharya played the game of their lives to seal a hard fought victory. 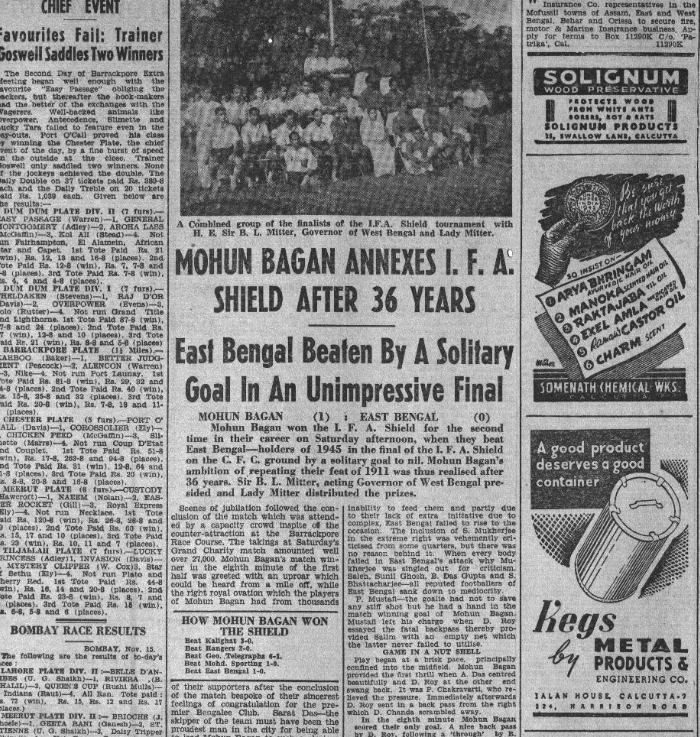 Mohun Bagan 4-1 East Bengal (1934 Darbhanga Shield semi final) : Amiya Deb became the first footballer to score a hattrick in Kolkata derby during this match. He scored all four goals in this thrashing & remains the only Indian player to have bagged four goals in the derby.

Mohun Bagan 1-0 East Bengal (1947 IFA Shield final) : There’s a famous anecdote from Mohun Bagan’s 1911 IFA Shield victory. When the players were carried on shoulders of crowd after the match a priest pointed to the Union Jack & asked one of the players, “You have won on field but when will you bring down that flag?”. Legend has it, the reply came “When Mohun Bagan will win IFA Shield again”. In a curious twist of fate, Mohun Bagan’s second Shield triumph came in 1947.

Mohun Bagan had arguably the strongest team in India at that time, with several legends of Indian football in the squad. In 1948 many members of that team, like Sailen Manna, Dr T Ao, Mahabir Prasad were prominent players in India’s first Olympic football squad. Mohun Bagan won the 1947 Shield thanks to a goal by Salim. Sarat Das & Sailen Manna formed an impenetrable defensive wall to deny East Bengal’s strong forward line. 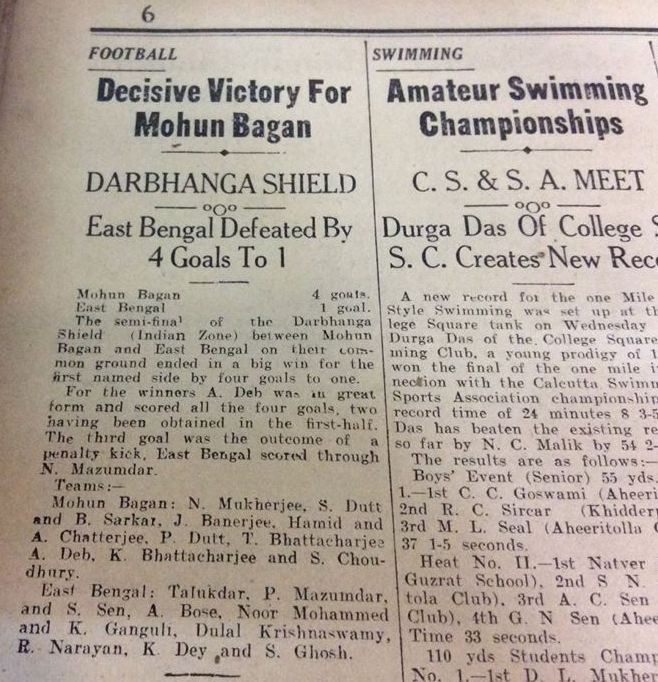